Read our job story of one of our valued customers from Stratford Road, West Hartford, CT.

Laurie and Norm were referred to Rhino-Back Roofing by a friend and fellow happy customer in West Hartford, CT 06117. They were having leaking in several areas inside their Stratford Road home, which was built in 1992 and had the original roof still in place. Upon initial inspection of the attic space we noted several areas where the roof was failing and the plywood was visibly wet. Laurie had contacted a few other local roofing companies and gotten some estimates, but was not comfortable until she met with Rhinoback Roofing. The morning of the project, our Production Manager Josh met with Laurie and Norm and did a complete walk-around of the property, reviewing the roof replacement process and what to expect before beginning the work. The roof was stripped down to the original plywood, and we replaced the plywood in areas where there was water damage and rotting from the old, failing roof. We then installed Ice & Water Shield along the eaves, valleys, and other high-risk areas, as well as a protective Synthetic Underlayment, and finished the roof with beautiful, high-quality architectural shingles. Laurie and Norm’s new roof looks fantastic, and their home is now completely protected from the elements. Once the job and cleanup were completed we did a final walk-around and inspection. Laurie and Norm were thrilled with both the roof itself as well as the service provided by Rhino-Back Roofing.

The results are spectacular and it looks like a new home!

It was an absolute pleasure to work with Rhino Back Roofing from start to finish. Mike, Josh and the rest of the team are consummate professionals during every phase of the process. From the initial meeting, to the final cleanup, we experienced a sense of confidence that the job was being done right. The results are spectacular and it looks like a new home! Thank you Rhino Back!

Laurie-We really enjoyed meeting you and helping you with your roofing project, you were wonderful to work with! Thank you so much for the kind words, and please stay in touch! Mike & Lisa Trouern-Trend and the Rhino-Back Roofing Team. 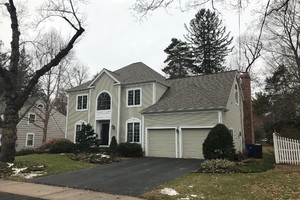 Get Your Free Roof Replacement Estimate!